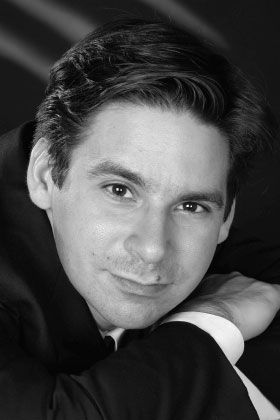 The operatic repertoire of Angelo Raciti encompases a wide range of lyric and lirico spito roles: Don José in Bizet's Carmen, Rodolfo in Puccini's La Bohème, the title roles in Mozart's Idomeneo and Gounod's Faust, and Alfredo and Fenton in Verdi's Traviata and Falstaff. His operetta repertoire includes Sou-Chong in Lehar's The Land of Smiles, Stanislaus in Zellers Der Vogelhändler, as well as the Duke of Urbino and Alfred in Johann Strauss's Night in Venice and Die Fledermaus. With the title roles in Monteverdi's Orfeo and Il ritorno d 'Ulisse in Patria, he has also emerged in the field of ancient music.

Since 2004 he has performed in numerous large concert halls in addition to his engagements at the Mittelächsische Theater Freiberg and the Mecklenburg Landestheater, such as Tonhalle Düsseldorf, Berliner Konzerthaus, Stadthalle Kassel, Liederhalle Stuttgart, Nikolaisaal Potsdam, Konzerthaus Freiburg, the Musikhalle Hamburg, as well as in the Victoria Hall Geneva.

His concert repertoire ranges from Monteverdi's Il combattimento di Tancredi e Clorinda to Rossini's Petite Mass Solenelle and Mendelssohn's Elias to Kodalys Psalmus hungaricus. Angelo Raciti studied English and German in Basel, Zurich and Berlin and was a member of the graduate program at the John F. Kennedy Institute for North American Studies at the Free University of Berlin.

At the same time he studied singing privately, first as a baritone, then as a tenor with KS Ruggiero Orofino and in masterclasses with William Matteuzzi and KS Karan Armstrong. He made his stage debut at the Berlin University of the Arts as Zhivny in Janacek's rarely performed opera Osud (Fate). He works as a language coach at the Stuttgart State Opera and is a faculty member of the Opera Program at the Stuttgart School of Music and the Peforming Arts.