She was one of the most extraordinary singers and stage personalities of the 20th century. Both in opera and as a recitalist she belonged among the world stars of her generation. Puccini, Toscanini and Caruso loved her italianate sound and her passionate portrayals on stage. Erich Wolfgang Korngold and Richard Strauss composed several roles in their operas explicitly for her.

Her career began at the Hamburg State Opera in 1910 where she was soon discovered by the general manager of the Vienna State Opera. For more than twenty years she was one of the darlings of the discriminating Viennese public while also conquering the audiences in Paris, London, Berlin, New York and even Australia. She scorned Hermann Göring's offer to become the prize singer of the Nazi government and emigrated to the US in 1938. With her legendary portrayals of Sieglinde, Elsa and the Marschallin she had already established herself as a star in Chicago, San Francisco and at the Metropolitan Opera, and her recitals made her the foremost ambassador of German art song - this was her way of staying true to the culture of her homeland while condemning the destruction perpetrated by the Nazis in Europe.

In 1945 Lehmann bade farewell to the operatic stage in a final performance of Rosenkavalier at the Met, and in 1951 she gave her last recital in New York's Town Hall. She was among the founders of the Music Academy of the West in Santa Barbara, California, where she taught virtually until her death in 1976, passing on her legacy to an outstanding generation of world-class singers such as Grace Bumbry, Marilyn Horne, Sue Patchell, Martile Rowland, Thomas Moser and Karan Armstrong.

While she was revered and honored in the US, as well as in London, Paris and Vienna, Germany largely forgot Lotte Lehmann until a very recent number of initiatives germinated in her birthplace Perleberg, a small town that lies halfway between Hamburg and Berlin. Perleberg. Since 2009, Perleberg is now the home of the Lotte Lehmann Akademie, an intensive Summer Institute for emerging opera singers with a dedicated building in the center of town and world-class faculty headed by distinguished Lehmann students Karan Armstrong and Thomas Moser.

The Lotte Lehmann League provides extensive information on Lehmann's life and art. Gary Hickling has meanwhile also published a wonderful series of free multimedia iBooks - among them a monograph as well as documentation of Lehmann's masterclasses. 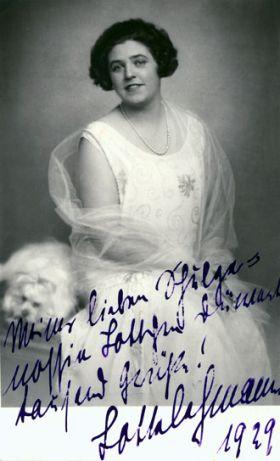